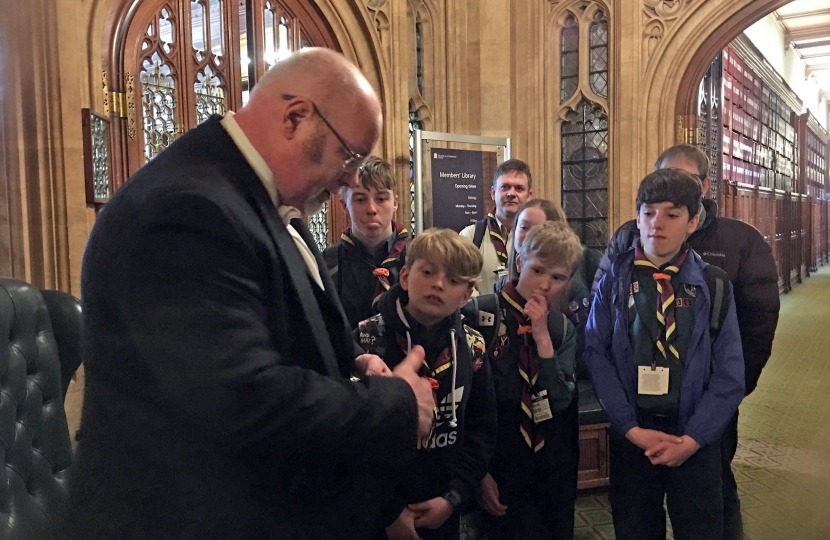 Nus Ghani, Member of Parliament for Wealden, welcomed Crowborough Scouts to Parliament on the 8th of April. The Member of Parliament met with the Scouts and took questions from them regarding her role as their local MP, her work as a Government Minister, as well on Brexit, and other key local issues including the environment, jobs, the impact of social media on mental health, and crime.

As part of their visit, the Scouts were taken on a tour of the Palace of Westminster, which included both the House of Commons and House of Lords chambers. They explored the history and significance of the building, as well as its role as the heart of a 21st century government.

Nus regularly organises tours for local groups and charities, and any interested parties should contact Nusrat.Ghani.MP@Parliament.uk to arrange a visit.

Nus Ghani, MP for Wealden, said: “Organisations such as the scouts play a vital role in our local community: they instil discipline, teamwork, care for others and the environment, and allow young people to revel in the joy of being outdoors.

“The hard work put in by the volunteer scout leaders to ensure that these groups are able to run day-in-day-out is phenomenal: their boundless energy, as well as their commitment to their scouts is something that we in Wealden can be enormously proud of.

“I hope that by coming to visit Parliament the scouts got a flavour of the work that I do here, both as a transport minister, and as their local MP, campaigning on a variety of topics that are of key importance to young people locally such as jobs, crime, the environment, and young people’s mental health.

“The scouts asked me tough questions. It’s great to see just how engaged with politics and current affairs these young people are.

“Their enthusiasm for the opportunities scouting provides them with was also striking, and is a mark of just how hard-working the leaders are.

“I’m looking forward to being able to pay them a visit in the constituency soon!”

Photo:
One of the Parliamentary Doorkeepers with Crowborough Scouts

The scouts asked me tough questions. It’s great to see just how engaged with politics and current affairs these young people are.

Their enthusiasm for the opportunities scouting provides them with was also striking, and is a mark of just how hard-working the leaders are.