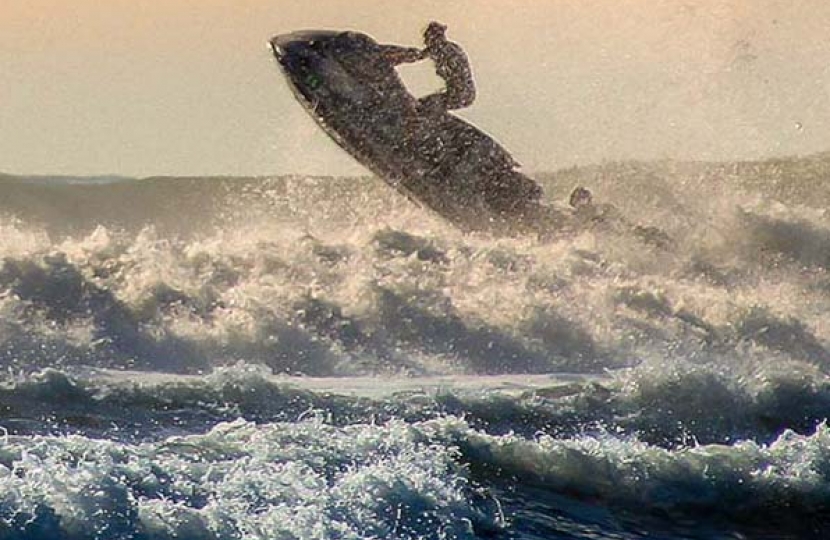 An East Sussex MP, and Chairman of the Transport Select Committee, Huw Merriman, this week held a Parliamentary inquiry into the safe use of jet skis and coastal motorised personal watercraft. The inquiry was launched following concerns from across the East Sussex coast, and other parts of the country, highlighting the dangers to swimmers and other seafarers from these vehicles.

Jet skis have become increasingly popular in recent years and there are approximately 12,000 in the UK. Six deaths were reported between 2009 and 2019 involving jet skis. Although local authorities and harbour authorities can, and sometimes do, regulate jet skis, they are not currently subject to national regulation in law. There is therefore no national requirement for people to have a licence, undertake training, or wear a lifejacket, nor is there a minimum age to operate a jet ski.

On the day before the inquiry took evidence, the Government responded by launching a consultation to regulate and clamp down on the dangerous driving of jet skis. The consultation proposes making recreational and personal watercraft, such as jet skis and speedboats, subject to the same safety obligations that exist for the operators of ships. Proposals also include giving enforcement authorities an additional power of prosecution to be used in cases of deliberate or negligent misuse. This would result in tougher sentences for those found to be driving dangerously.

The Transport Select Committee evidence session heard from a variety witnesses from industry, the police, local government, and the Maritime Minister and examined the effects of jet ski use, whether current regulations offer sufficient protections, and the likely impacts of the Government’s preferred option of reform.

“In responding to our inquiry, I welcome the Government’s decision to look to tighten-up the laws surrounding the use of jet skis which have a significant impact on coastal areas such as East Sussex. They can be extremely dangerous to others enjoying swimming and other water sports when in the hands of inexperienced or selfish users who put others at risk.  Regulation to allow for effective enforcement and to improve safety is long overdue.

“In addition to serious concerns about the safety of users and other water users, it is estimated that almost a quarter of fuel used in jet skis is flushed out into the water as raw fuel vapour emissions. This has serious consequences for both water quality and wildlife.

“I look forward to reviewing the Government’s final proposals in due course. If these do not go far enough to return our waters to a calmer place then we will look for legislation to go further.”

Residents have until 1 November 2021 to give their own views on the safety and danger of motorised personal watercraft.