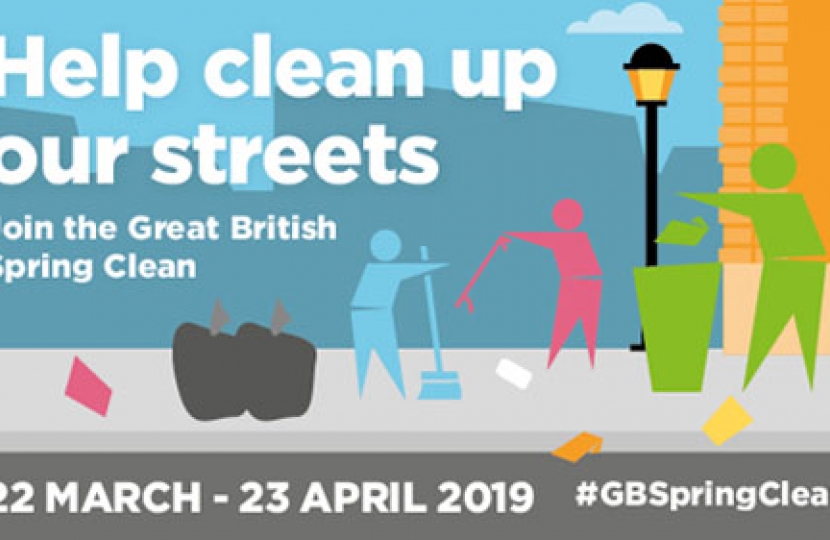 The campaign, which runs from 22 March to 23 April, will see up to half a million people take action to clean up streets, parks and beaches across the country.

The Great British Spring Clean brings together individuals, community organisations, businesses and councils to make a difference to the environment on our doorstep and in 2018 around 370,000 #LitterHeroes collected more than 630,000 bags of rubbish. We are hoping many individuals and community groups from Wealden will join in.

Last year 37 groups across the District collected some 2.5 tonnes of litter in their local communities.

“We are hoping that even more people will want to take part this year,” said Councillor Roy Galley, Cabinet member responsible for Waste Management.

“It is important we do all we can to stop plastics and other waste getting into water courses and open country where they can cause great harm to  inquisitive wildlife. It is local people who best know their neighbourhood and where litter can build up. They can ensure their communities receive a thorough spring clean.

“The Council has purchased a supply of litter-picking equipment including litter picks, gloves and bag hoops. Our waste contractor, Kier, is also helping out by donating some of the equipment and providing a special waste collection service. Many groups already have their litter-picking equipment from previous events. So until the end of February, priority will be given to new groups. After February, equipment will be allocated on a first-come-first-served basis. Waste sacks and waste collection services are available to all groups.”

To find out how you can take part in the Great British Spring Clean in Wealden visit www.wealden.gov.uk/springclean , email springclean@wealden.gov.uk or telephone 01323 443322.

“We are delighted that Wealden District Council is supporting this year’s campaign and would like to thank them for their support,” said Keep Britain Tidy Chief Executive Allison Ogden-Newton.

“The Great British Spring Clean is an opportunity for the millions of people who care about the environment on their doorstep to do something positive that will make a visible difference. Without councils across the country giving the campaign their backing, our volunteers would not be able to do the incredible job they do.”

Further information about the Great British Spring Clean can be found at www.keepbritaintidy.org

The Great British Spring Clean is the country’s biggest mass-action environmental campaign. The campaign was first run in 2017. In 2018, despite the Beast from the East, more than 371,566 #LitterHeroes volunteers took part including more than 126,651school children.

Of those who took part in the Great British Spring Clean 2018 and responded to Keep Britain Tidy’s survey, many report positive mental health benefits;

The Great British Spring Clean 2019, in partnership with the Daily Mail, is made possible thanks to headline sponsor Wilko and is supported by players of People’s Postcode Lottery. The campaign is also supported by Clear Channel, M&S, Coca-Cola, Mars Wrigley Confectionary, Walkers, Greggs, McDonald’s UK, Kärcher and Costa Coffee, with special thanks to Helping Hand.

“We are delighted that Wealden District Council is supporting this year’s campaign and would like to thank them for their support."

“It is important we do all we can to stop plastics and other waste getting into water courses and open country where they can cause great harm to  inquisitive wildlife."