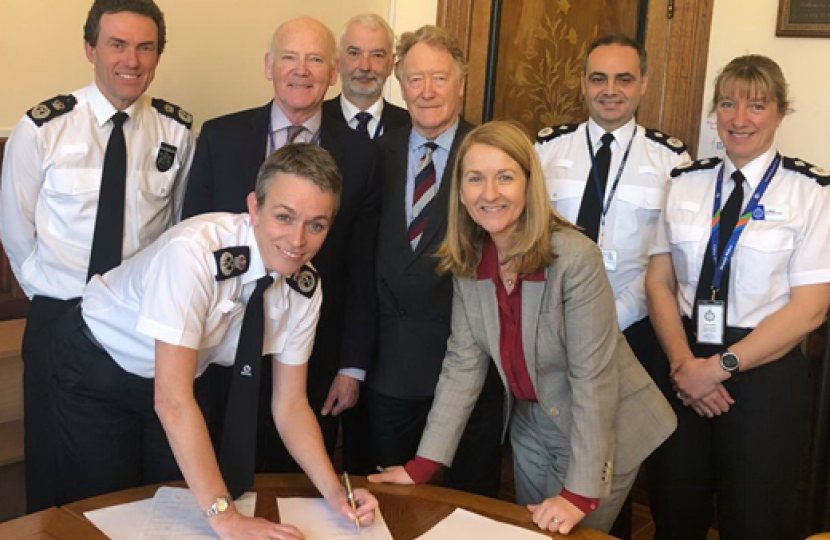 An update from the Sussex Police & Crime Commissioner, Katy Bourne following news that in the last few weeks there have been a number of knife crime incidents across the country which have rightly raised public concern.

"During Operation Sceptre (national knife crime campaign, 11-17th March) Forces across the country, including Sussex Police, have been visiting schools to inform and educate young people about the dangers of carrying knives. They have also opened amnesty bins for people to hand in knives and take them off the streets, backing up the work carried out all year to keep our communities safe.

"Nationally and locally we are seeing increases in serious violence and organised crime groups with vulnerable young people being targeted and exploited to carry out their criminal biddings, including carrying knives. This is why I bid for funding from the Government’s Early Intervention Youth Fund and successfully secured £891,616 to bolster diversionary activities for young people across Sussex and strengthen our community safety partnerships.

"This extra funding will help the VCSE (voluntary, community and social enterprise) sector, schools, health, statutory partners and the police engage positively with under 18s at risk of committing serious violence and those who have already come to the attention of the police.

"Assistant Chief Constable Nick May said: “We are keenly aware of the traction the topic of knife crime is getting in the media at the moment.  This extra funding secured by the PCC is a fantastic opportunity to provide diversion and support for young people who are experiencing challenges in their life; which may lead to their involvement in this type of criminality.”

"I will continue to work hard, alongside partners, to capitalise on national funding opportunities and provide diversionary activities to help young people make better choices.

"Findings published from the Police Federation’s Demand, Capacity and Welfare survey recently revealed that almost 90 per cent of Sussex Police officers have said morale within the Force was low and almost four out of five have faced mental wellbeing issues over the last 12 months.

"At my Performance and Accountability meeting today with senior officers I asked for clarification on these results and assurances that the extra resources from the rise in this year’s precept will see an alleviation of some of the strain placed on existing officers and staff. Catch up here.

"Assistant Chief Constable Jo Shiner said: “It is important that we look after those who arguably do one of the most difficult jobs there are. In policing unfortunately there will always be trauma as these men and women see and experience things many wouldn’t in their lifetime. We have invested in support mechanisms for officers and staff and the extra resources from the precept rise have already had a positive impact on the level of demand.”

"Yesterday at the Regional PCC and Chief Constable meeting I signed the first ever Regional Collaboration Agreement between Hampshire, Thames Valley and Surrey Police Forces.  This is a step forward in ensuring that we seize every opportunity to work more effectively together across the four force areas, further strengthening the policing network already in place.

Lose the knife, not a life