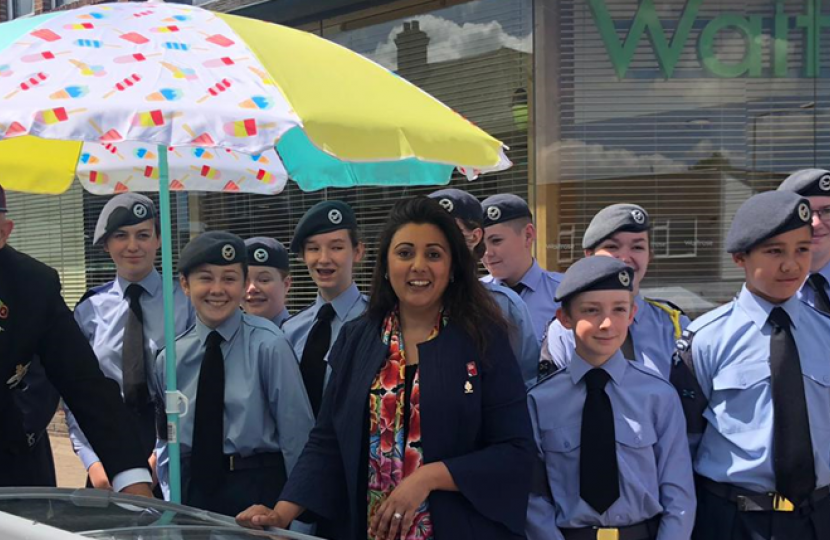 Nus Ghani, MP for Wealden, attended the Armed Forces Day celebrations at Crowborough for a parade down the High Street.

The event was organised by the Crowborough Branch of the Royal British Legion, with cooperation from the town council.

The event included a parade, ceremony of remembrance, and performances from a variety of bands and dance groups, celebrating Britain’s ceremonial music, as well as music from the Second World War, made more poignant by the recent anniversary of D-Day.

The groups, including the Heathfield Silver Band, the Sea Cadet Band, and Lindy Hop Dance Group performed throughout the day, under glorious sunshine.

Nus, speaking at the event, commented on the debt owed to all those that have served in our Armed Forces, and the obligation on our communities to look after them when they return home.

Speaking of her role as President of the Crowborough Air Cadets, Nus highlighted the fantastic opportunities that young people are afforded by the armed forces, and the activities that they can pursue, which instil values of team-work, comradeship, hard-work, and discipline in young people, which set them in good stead for life, regardless of if they go on to pursue a military career.

Nus Ghani, MP for Wealden, said: “Armed Forces Day is a fantastic opportunity to celebrate our history, honour the sacrifice of those that came before us, and connect us to local stories of heroism and sacrifice which bind our communities together.

“I was honoured to be able to speak at this event, especially because of the recent 75th anniversary of the D-Day Landings, landings which many men from Wealden took part in.

“Seeing such a diverse group of constituents at this event was wonderful: this is all of our history, whether you are young or old, and we should all be aware of the sacrifices that have been made for our safety and security, all over the world. I was particularly moved by the members of the Royal British Legion in the parade, carrying our flags, as they have done throughout their lives for this country.

“I was delighted in particular to see such a strong representation from the Crowborough Air Cadets, who I am privileged to be the president of. As always they were turned out immaculately and were a great credit to their parents and the community. Their band is brilliant, and I look forward to hearing more from them on my next visit to the unit.

Photos: Nus addressing the Parade; Nus with a former member of the Parachute Regiment, and the Crowborough Air Cadets.

"Whether you are young or old, and we should all be aware of the sacrifices that have been made for our safety and security, all over the world. 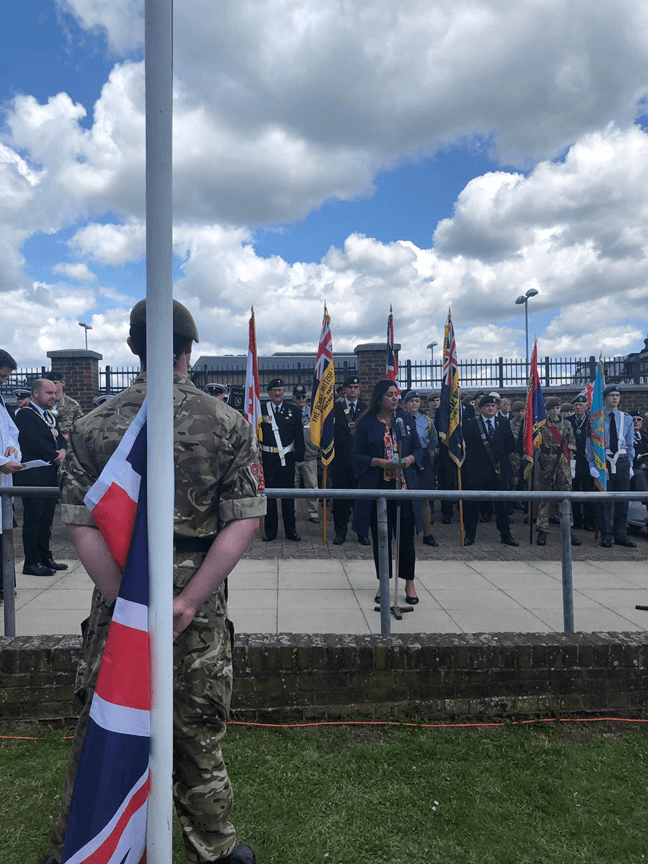