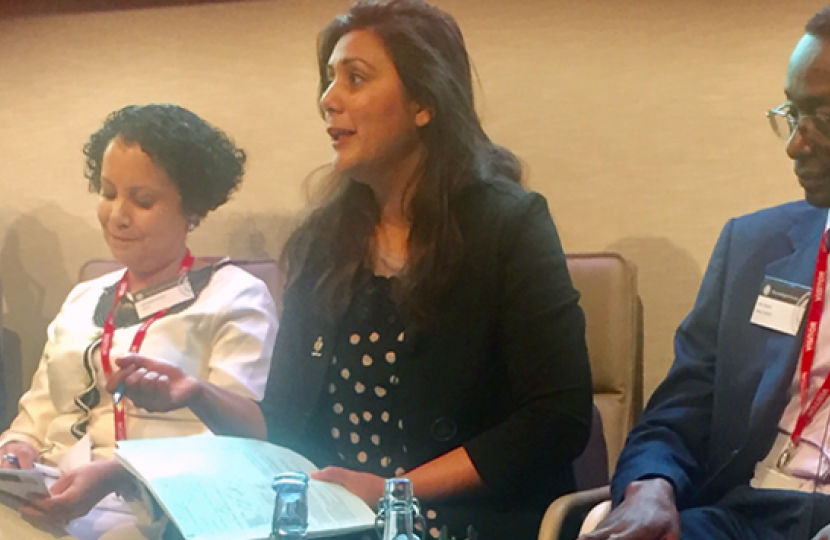 Nusrat Ghani, MP for Wealden, spoke at a City of London Geoscience Forum event recently, discussing the importance of diversity across the extractive industries sector.

The panel, chaired by Sir Geoffrey Palmer, consisted of Nus and experts from mining, geology and venture capital.

The event was organised by her constituent, Mark Steeves, in association with his business: Samphire and Associates.

At the event, Nus spoke of her experience in leading the long-term planning for the UK Maritime Sector, whose plan, Maritime 2050 she was heavily involved in creating. This plan, including the creation of the Women in Maritime Taskforce, was used by Nus as an example of the steps that can be taken to redress issues of diversity in the sector.

Nus also commented on the importance of creating visible role-models for young people in non-diverse sectors, as so to encourage them to see themselves in roles they hadn’t considered before. This is something she has been heavily involved with as Minister for the Year of Engineering, where over 1 Million primary and secondary age children were given the opportunity to engage with engineering and other STEM fields for the very first time, to inspire them to become the scientists and engineers of the future.

Nus Ghani, MP for Wealden, said: “I was delighted to speak at this event, organised by my constituent, Mark Steeves, and to share the insight that I had gained through my work with the Department of Transport when it comes to creating diverse workforces. Studies show that more diverse businesses are ultimately more productive and profitable.

“The extractive industries sector has recognised that a non-diverse workforce harms business, and I welcome the steps that my fellow panellists were excited to be taking toward a more representative industry.

“Engaging with the businesses, aspirations, and concerns of constituents is one of the best parts of being an MP: I’m proud to support Wealden businesses on the national stage.

“I’d like to thank Mark Steeves, of Samphire and Associates for inviting me to participate in this fascinating event.

“Creating mentoring opportunities, encouraging young people to recognise the paths available to them, and ensuring that the UK remains front-and-centre in the geoscience sphere for the future is something I am proud to support."