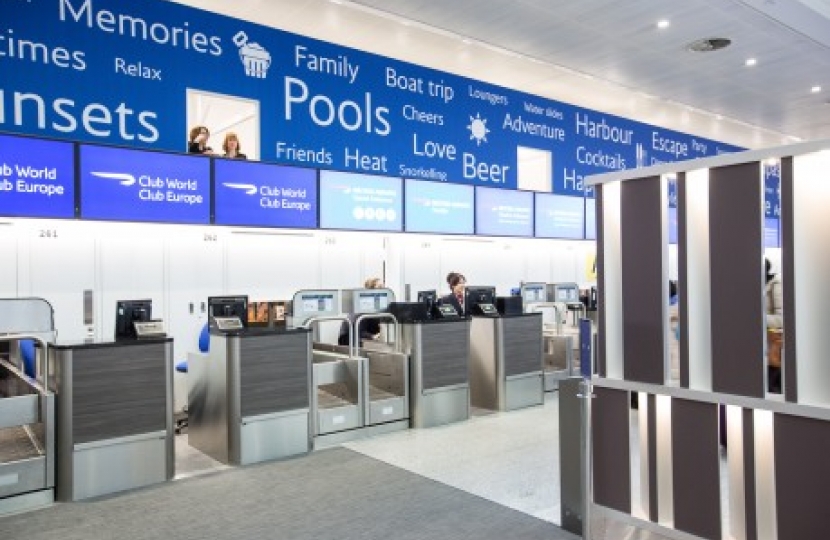 Among East Sussex MPs fighting for BA staff at Gatwick who are threatened with job losses, Huw Merriman, MP for the Bexhill and Battle constituency and Chair of the Transport Select Committee, this week challenged British Airways to drop their redundancy and restructuring plans and commit to a future at the Sussex airport.

With many local residents working for the national flag carrier, and at risk of losing their jobs or their terms and conditions, the MP chaired a Transport Select Committee meeting and quizzed BA boss, Willie Walsh, about his plans on Monday.

The MP asked why BA had decided to embark on a massive restructure of the company which would make almost a third of the 43,000 local and national staff redundant.  He probed the airline boss on why BA had taken furlough money from the government scheme provided for companies to support jobs, only to then put the same staff on notice of redundancy. Clashing with Mr Walsh, the MP asked why, if BA claimed reducing pay and terms was due solely to surviving the coronavirus downturn, Mr Walsh would not commit to repaying pay and reintroducing terms in the future pegged to any percentage increase in profits. His committee also took BA to task for its failure to provide passenger refunds, as they are required to do by law.

Turning to Gatwick, and rumours that the airliner may permanently close down its operations at the Sussex airport, the MP asked if BA saw a future for itself at airport. Pressed, Mr Walsh confirmed that he did see a positive future for BA at Gatwick and regarded it as a well-run airport with a customer base which BA would want to serve.

Taking to the House of Commons chamber the next day, the MP continued to press for BA staff to be given more certainty and for BA to use the extended furlough scheme to wait until it has a chance to test the aviation recovery before staff lose their jobs or their security. The MP also questioned the logic of bringing in a system of 14 day quarantine for incoming travellers as the UK eases the lock-down, rather than when it first started.

Speaking after the exchanges in Parliament, he said “I have had over 2,000 emails from BA staff who work at Gatwick and other airports across the UK. I recognise the devastating impact that COVID-19 is having on all sectors of the travel industry but I am concerned that BA is using this crisis in order to carry out a major restructure of the company, cut jobs and put long-standing and loyal staff onto less favourable contracts. Their proposals will see up to a third of BA staff being made redundant and those who are retained will find their terms and conditions radically downgraded. Given that Mr Walsh would not commit to sharing any return to profit, it is hard to avoid the conclusion that this is an opportunistic move to restructure the company under the guise of responding to the pandemic situation. This is neither ethical or fair.”

On Gatwick the MP said “I have been a vocal supporter of Gatwick airport and the airlines who fly from it. Gatwick employers provide quality and well-paid jobs for many local residents in an area which has relatively low wages compared to the regional norm. BA ending its operations from Gatwick, hot on the heels of Virgin’s withdrawal, would be a blow for our local economy and our ability to connect with the globe. I was pleased to hear from Mr Walsh that he does see a future for BA at Gatwick and indeed he praised the airport saying he thinks Gatwick is a better airport than Heathrow in many ways. I’m keen to press him to protect his staff and return overdue flight refunds to customers.”

The Transport Select Committee will conclude its inquiry on Coronavirus and the impact on Aviation next week and take evidence from trade unions, the Civil Aviation Agency before issuing its report and recommendations on action to take.

Today in a major speech the Prime Minister has set out our plan to transform the provision of skills so that we can help people to retrain and find new, well-paid jobs as part of our agenda to Build Back Better.

I am concerned that BA is using this crisis in order to carry out a major restructure of the company, cut jobs and put long-standing and loyal staff onto less favourable contracts

An opportunistic move to restructure the company