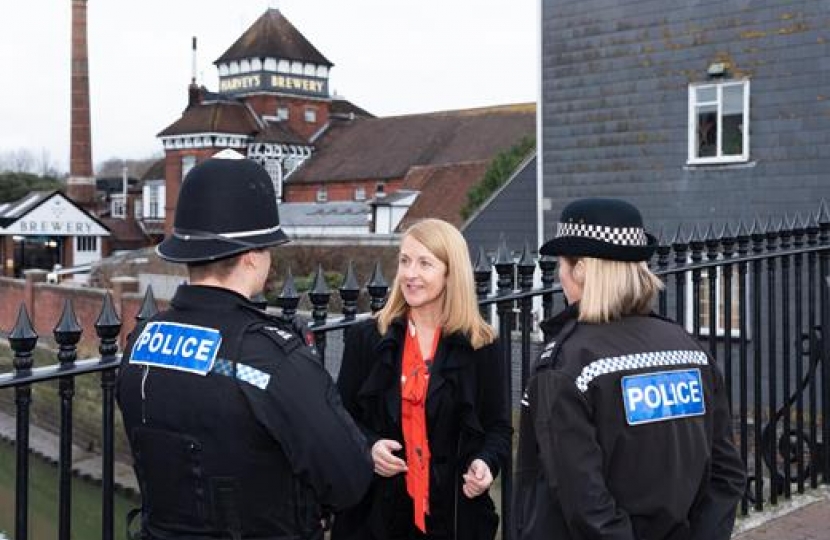 Sussex Police and Crime Commissioner, Katy Bourne, reports: "This week I secured a £1m funding commitment from the Home Office to support a law enforcement surge in Sussex to tackle serious violence. The funding allocations followed discussions with Ministers earlier this year which led to £100m being made available to tackle knife crime in particular.

The Chief Constable assures me that Sussex Police is developing an operational plan that will mean the Force will be ready to step up targeted actions across the county supported by this immediate funding boost.

This is great news for Sussex Police and Sussex residents and perfectly complements the work we have already begun through our Early Intervention Youth Programme - REBOOT- which in just two weeks has already engaged with 15 young people to steer them away from crime and violence.

Assistant Chief Constable Nick May said: "We are carrying out patrols in hotspot areas, targeting repeat victims and offenders, using our stop and search powers, working with trading standards and with partners to prevent crimes and educate young people. Action on violent crime and knife crime cannot be tackled by police alone and we continue to work with other agencies to take positive action when knife crimes occur, focusing on engagement and prevention, especially with young people.The additional funding will allow us to build on this and make a real difference to communities across the county."

Last year the Prime Minister announced a national day to commemorate the death of Stephen Lawrence (22nd April). I am committed to stamping out racial abuse and hate crime of any kind in Sussex. I recognise the importance of engaging with all communities so, ahead of this day, my office met with the Racial Harassment Forum in Brighton to listen to their concerns about policing. "

With a strong current focus on anti-discrimination and equality it is encouraging to note how far the Force in Sussex has come to embrace diversity. The Racial Harassment Forum told us: “Visible policing in terms of the BAME community is so important; people and communities behave and moderate their attitudes when they see uniforms patrolling."

The rich diversity of our communities here in Sussex is one of our greatest strengths and the police have done some fantastic work both internally and externally with the public to promote diversity and inclusivity.

The injection of 100 extra Police Community Support Officers into neighbourhood policing, made possible through the rise in this year's precept, is a welcome addition to the Force for these communities as expressed by the Forum: "Extra officers, who receive diversity training, will build the trust that our communities have in the police which will then lead to more BAME recruits."

I would urge anyone who feels they may have been a victim of racial harassment to report it. I know that the Chief Constable and senior officers are committed to ensuring that all reports of this type will be taken seriously.

Sussex is one of 18 forces that have now been provided with an immediate share of £51m by the Policing Minister to target serious violence.