The East Sussex economy will be boosted by multimillion pound road improvements following an announcement today that the Newhaven Port access road scheme will move HGVs away from unsuitable local roads and help create jobs.

The government has committed £10 million to the Newhaven Port access road scheme to move HGVs away from using unsuitable local roads, while also supporting Newhaven Port’s vital role in transporting goods both internationally and around the UK and to support the local economy in Newhaven and the wider East Sussex area.

The £23 million project will allow direct access into the East Quay area of Newhaven Port, and will help create 436 jobs — indirectly supporting a further 1,430 — around Newhaven.

It will take HGVs away from Railway Road and Beach Road, which are unsuitable for the heavy vehicles and will also support Newhaven enterprise zone through the unlocking of an additional 80,000 square metres of business space.

Newhaven Port was one of my first visits as Maritime Minister and that is why I am delighted that we are investing in improvements to the road connections between our key economic areas and our ports.

This scheme will reduce the number of lorries on currently busy local roads — making life easier for others using the roads.

Cyclists and pedestrians will be able to use a new cycleway and path alongside the new road.

The works are due to start shortly and are scheduled to be completed in February 2020. East Sussex County Council will provide the remaining £13.02 million.

We very much welcome approval of the government funding which means we can now bring this scheme to fruition.

The road will create a direct access to the East Quay and is a key part of our plan for the economic regeneration of Newhaven.

It will be a catalyst for growth and for the creation of much-needed jobs for people in Newhaven and the surrounding area.

The work announced today is the second phase of the road improvements after the first section was completed in 2015.

It will see a 650 metre road built between the Pargut roundabout and the proposed port roundabout. It will also include a new 122 metre-long bridge over the Newhaven-Seaford branch line and Mill Creek Canal.

This scheme was included in the department’s port connectivity study which has shown that better connections to English ports could help businesses thrive and boost the nation’s economy. The study highlighted that improved road and rail links can provide more effective freight journeys between key economic areas and ports, boosting productivity, lowering costs and giving access to international markets.

It also comes as part of a £55 million government boost for local road schemes, with money also being spent on road improvements in Cheshire.

"Support Newhaven enterprise zone through the unlocking of an additional 80,000 square metres of business space." 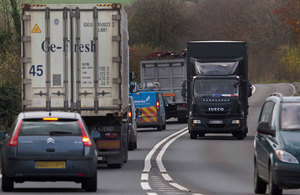 "Create direct access to the East Quay and is a key part of our plan for the economic regeneration of Newhaven."