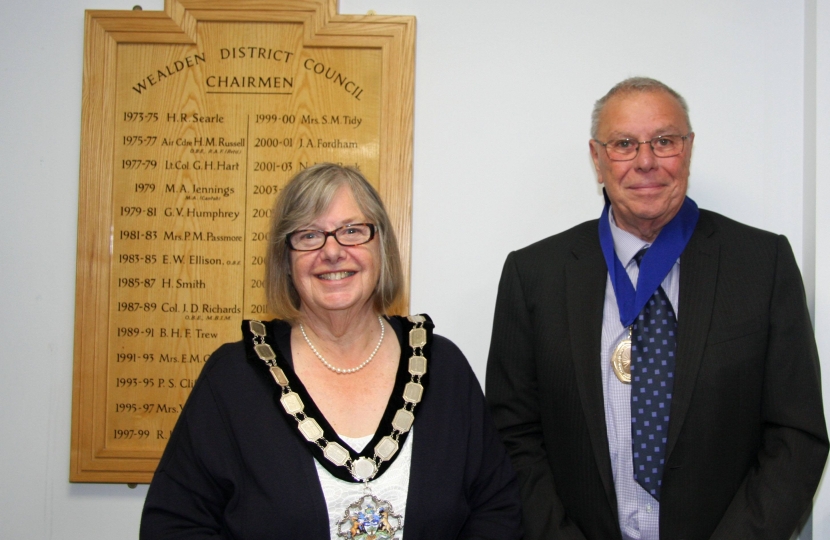 There's a new chairman for Wealden District Council as Councillor Pam Doodes has been elected unopposed to the position at the first meeting of the new Council.

She succeeds Councillor Chris Hardy, the member for Hartfield who has been chairman of the Council for the past three years. Paying tribute to the retiring Chairman, Council Leader Bob Standley said Cllr Hardy had been an outstanding chairman who should be very proud of the contribution he had made to the Wealden community.

Cllr Doodes is the member for Herstmonceux and Pevensey Levels. She been a councillor for 20 years, having represented Ninfield, Hooe and Wartling on the Council since 1999. She has been a member of Cabinet and was Leader of the Council from 2007 - 2010.

As chairman, Cllr Doodes announced that one of her nominated Chairman’s Charities would be Dementia Support East Sussex.

Cllr Ronald Reed, the member for Crowborough Central, was elected Vice-Chairman of the Council. He was first elected to Wealden District Council in 2015 and has been a Crowborough Town Councillor for many years.

As chairman, Cllr Doodes announced that one of her nominated Chairman’s Charities would be Dementia Support East Sussex.