WHY DANIEL HANNAN IS STANDING AGAIN 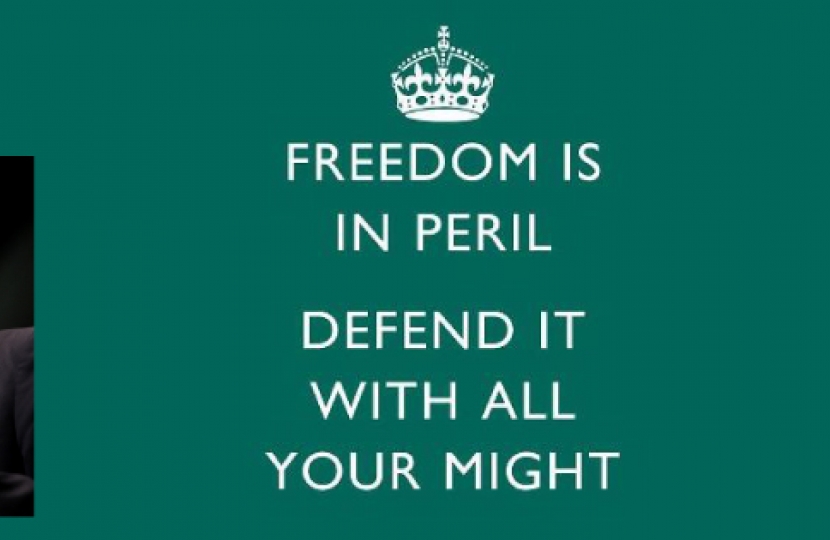 The Opposition parties have succeeded on blocking Brexit, at least for now, and we seem almost certain to face another European election next month.

I would dearly like not to contest it; but, after a lot of thought, I cannot escape the sense that failing to put my name forward would be tantamount to desertion under fire.

I set out my reasons in my Telegraph column Why I’m standing in the Euro elections that no one wanted – and urge you to vote Tory, which also explains why I, despite everything, I am asking people to vote Conservative.

For those who are not Telegraph subscribers, here is the full text:

WHY I AM STANDING IN THE ELECTION THAT NO ONE WANTS

Another European election? Seriously? Three years after we voted to leave the EU? Two years after a general election in which (let’s remind ourselves) fully 85 percent of the winning MPs were elected on manifestoes that promised to implement the referendum result?

We’re supposed to be an advanced democracy, for Heaven’s sake. Our fathers crossed the seven seas to plant the seed of representative government – that is, the idea that an elected assembly should be the guardian of the people. Yet we have lately watched our MPs siding with overseas interests against their own voters.

Lots of people, not just those who voted Leave, see new elections as absurd, grotesque, insulting. They are right. Yet one more Euro-poll now looks inevitable. True, it could in theory be circumvented if Brexit terms are agreed this month. In practice, though, the EU’s insistence on the Irish backstop makes an accord impossible. Not that we can exactly blame Eurocrats for being intransigent. Ever since the 2017 election, our MPs have been signalling to them that, if they offer tough enough terms, Parliament will find a way of dropping Brexit altogether.

The past three years have shown quite how defunct our state machine is, how rusted its pistons, how clogged its tubes. In the time that has elapsed since the vote, an earlier generation managed to get three quarters of the way through the First World War. Yet we seem unable to enact the simple changes needed to join the 170 states that somehow get by outside the EU.

You may be feeling exasperated about all this but, I assure you, I’m more exasperated than you are. I have been working for 30 years to restore our national independence. I have watched with mounting horror as opportunity after opportunity has been tossed away. And on top of the obvious political objections, I have plenty of personal reasons to want to jack it in. My plans have been premised for years on the idea that I’d be free to do other things from this summer. I now find myself cancelling flights, unscrambling arrangements, backing out of job offers that won’t come again.

I don’t mention these things in the hope of sympathy: no MEP should ask for that. I mention them to show what a difficult decision it has been contest this election as a Euro-candidate. If I could find an honourable way of getting out of it, I would. But I can’t avoid the sense that walking away now would be tantamount to desertion under fire. So, for the fifth time, I am standing as a Conservative. And I am asking for your vote.

I have no illusion about what a tough sell this is. Many long-standing Tories are on strike. I know of several MPs who are planning to boycott the poll or to back a single-issue pro-Brexit party. More shockingly, many Conservative Association officers mean to do the same. They are polite people, so they are usually too discreet to tell me in so many words. Instead, they phrase it elliptically: “There’s a member of my branch, Dan, a very loyal Conservative, who is so sick and tired that, for the first time in his life, he won’t be backing us…”

I get it, folks, I really do. But what is at stake here is not how cross we are about the shenanigans at Westminster. What is at stake is the viability of Britain’s Centre-Right. There comes a point when a political party gets so badly hammered at a national poll that its position becomes irrecoverable. It happened to the Canadian Tories in 1993. It could happen to the British Tories next month.

Some people, obviously, regard that outcome with equanimity. Some positively thrill to the thought of Jeremy Corbyn in Downing Street, enacting his oddly stilted form of Chavismo and setting Britain against the Western alliance. If that’s your bag, fine. This column isn’t aimed at you.

Let me instead address those Telegraph readers who eschew doctrine and faction but who see themselves, broadly, as small-c conservatives. Let me appeal to patriots, freedom-lovers, supporters of enterprise, people who have voted Tory in the past but who want to give our leaders a slap across the chops. People, in short, who see an unwanted and unwarranted Euro-poll as a cost-free opportunity to send a message.

My friends, there should be no need to send a message. The message was delivered emphatically on 23 June 2016, when more British people voted to leave the EU than have ever voted for anything. The Conservatives got that message. What we didn’t get was the numbers needed to turn it into legislation.

Yes, there are differences among Tory MPs about what kind of Brexit there should be, but almost all of them start from the proposition that Parliament must honour the referendum result. The handful of Conservatives who carried on opposing Brexit after 2016 have largely now defected to other groupings.

No other big party stands unequivocally for Brexit. There is simply no other vehicle to deliver it. In fairness, at least the Lib Dems, Greens and SNP fought the 2017 election openly proposing to overturn the referendum (and all lost ground in consequence). The real villains here are Labour MPs, who swore blind that they would respect the verdict when they were seeking our votes, but who switched their position the moment the ballot papers had been safely gathered in.

This point cannot be stressed enough. The reason that Brexit has not been delivered is not that the government secretly opposes the idea. It is that it lacks a majority in Parliament.

The calculation of the single-issue pro- and anti-Brexit parties is that few will bother making that distinction. They are fighting on a “plague on all your houses” ticket. Labour, too, plainly hopes that, as the governing party, the Conservatives will take a disproportionate share of the blame.

Corbyn remembers the collapse in Conservative support that followed the ERM crisis in 1992. Never mind that Labour and the Lib Dems had been agitating to join the ERM for years, whereas the Tories came round only late and reluctantly. Never mind, either, that the Conservatives apologised while the other two parties continued to demand that we rejoin – a necessary condition of adopting the euro, which they both favoured. Politics isn’t always fair. Sometimes, it makes tactical sense to seek to create a sense of chaos and then point the finger at the party in office.

Labour is plainly hoping for something of that sort. Having worked with Brussels to frustrate Brexit, it now has the nerve to turn around and say, “Look, this lot can’t deliver, it’s time to move aside for someone else”.

The idea that Labour would make a better fist of the Brexit negotiations is too silly for words. The party is simultaneously pro- and anti-Brexit, pro- and anti-referendum. Its one clear policy – a customs union – represents the worst possible outcome for the UK. Eurocrats are incredulous that anyone in Britain is volunteering to keep the world’s fifth economy as a captive market for EU exporters, denying itself cheaper global imports, while giving up all say over its own trade policy. Yet Labour, from no higher motive than mischief, is now making that preposterous demand.

This is the party that will oversee Brexit if the Conservatives are defeated. And that’s before we get to Corbyn’s Soviet nostalgia, his reflexive support for any anti-British tyranny, his fondness for extra-parliamentary street movements.

If the Conservatives are laid out cold on the canvas, Labour wins the bout. That is how a two-party system works. And that is why, ultimately, next month’s poll is not a free hit. It will decide who is our next prime minister. It will thus indirectly determine when and how Brexit happens. Theresa May has already announced her departure: she has said that she would not as prime minister, lead Britain into another European election. Will her successor inherit an irrecoverable position? Will Jezza get into Downing Street, not as a guest, but as the man with his finger on the place where the button used to be before he had it disconnected?

In twenty years as an MEP, I don’t think I have ever appealed to “party loyalty”. It is a phrase often found in the mouths of the worst and stupidest people in any party, people who can’t be bothered to make a case for what they want. But, this time, it seems apt. What is at stake is not a particular policy or a particular leader, but the survival of the party of Peel and Churchill and Thatcher as a viable governing force. We could be looking at the end of a 200-year-old story – 350 years if we count the Tory prelude.

Britain has already voted to leave the EU. That decision has been made and won’t be unmade. What we need now is the strength to turn it into policy. Please give us the numbers we need.
​

NEW COLUMN
After a decade-long break, I am again writing regularly in the Sunday Telegraph. That column, along with all my videos, blogs, speeches and articles, appears on my website: www.hannan.co.uk

Labour is plainly hoping for something of that sort. Having worked with Brussels to frustrate Brexit, it now has the nerve to turn around and say, “Look, this lot can’t deliver, it’s time to move aside for someone else”.