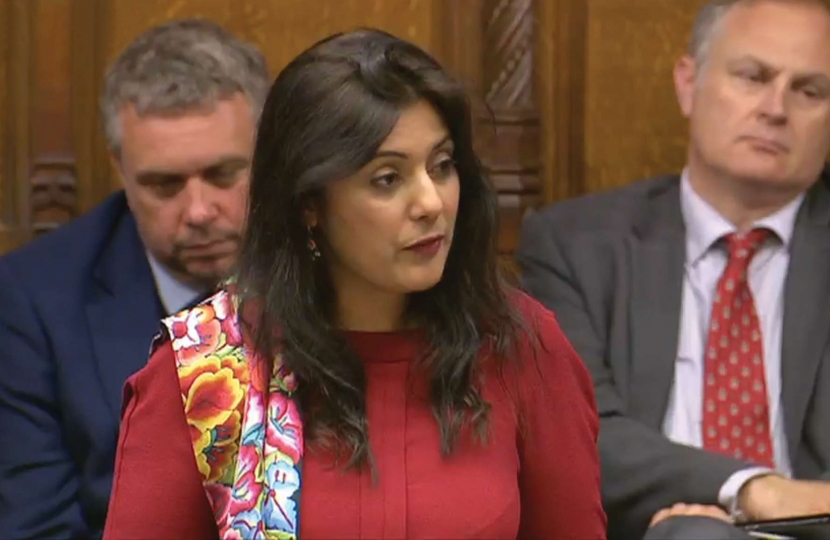 Nusrat Ghani is the Conservative MP for Wealden and Vice-Chair of the powerful Conservative backbench 1922 Committee. Nusrat is the first woman in her family to receive a formal education. After state schooling, she studied at Birmingham City University, then Leeds for a master's degree. She’s had a career outside of politics, working for NGOs and the BBC World Service, which took her abroad to some of the world’s most difficult countries.

Within the constituency, she is proud to be the patron of the Hospice in the Weald, a patron of the Hailsham Cadets, President of Crowborough Cadets, Honorary Vice President of the Dorset Arms Angling Club, and a Breast Cancer Now Ambassador. Nusrat also holds a position as a Trustee of The Seafarers’ Charity. She Chaired the Government’s Rural Affairs Group and works closely with farmers and the NFU. She is a supporter of the community shed program and championed the local amateur choirs throughout the pandemic.

Nusrat has run many successful campaigns in the constituency, managing to keep Fletching School and Ridgewood, Mayfield, Groombridge, and Hailsham post offices open. She also secured a vital £1.3 million for Beacon Academy’s new roof and a further £1.3 million to fix roads in East Sussex.

In the 2015 general election Nusrat became the first female MP to hold the Wealden seat, elected with a majority of 22,967. In the 2017 general election she won 61.2% of the votes in Wealden, increasing her majority to 23,628. Again, she increased the party’s majority in the constituency to 25,655 at the 2019 general election.

Within Westminster, Nusrat has held a wide range of roles as a whip. As Transport Minister, she oversaw a large portfolio in the Department for Transport as Minister for Maritime and Minister for the Year of Engineering. It covered maritime, HS2, buses and taxis, as well as accessibility across all modes of transport. She also made British history as the first ever female Muslim woman to speak from the Dispatch Box in 2018.

Nusrat now sits on the Business, Energy and Industrial Strategy Select Committee, where she scrutinises the Government's response to Covid-19, UK supply chains, private sector competition, industrial strategy and COP26. She led an inquiry on supply chain transparency which exposed slave labour in UK value chains and the data harvesting of British consumers. For this, she was sanctioned by the Chinese Communist Party in March 2021, the only woman in Parliament who was, in an unprecedented move by the CCP to intimidate British MPs.

Nusrat was instrumental in leading on the Genocide Amendment to the UK’s flagship Trade Bill, aiming to stop the British Government pursuing preferential trade agreements with countries committing real time genocide. She was nominated for the 2021 NATO PA Women for Peace and Security Award and came runner up to Nancy Pelosi, Speaker of the United States House of Representatives.

You can often catch her walking or riding in the Forest, or having a drink in one of the many amazing pubs scattered around beautiful Wealden.

Conservative MP for Wealden, Nusrat Ghani,  has visited the Birthing Centre at the War Memorial Hospital in Crowborough to meet the team of midwifes and celebrate its reopening.

The new Conservative leader of Wealden District Council visited the Ukrainian Support Hub in Mayfield with local MP, Nus Ghani, to welcome Ukrainian families to Wealden and to thank volunteers who have been coordinating local support.

Councillor Ann Newton, who took over as leader of the authority this month, and is also the portfolio holder for Planning, has welcomed the input from Wealden MP Nus Ghani and Huw Merriman, the MP for Bexhill and Battle, whose constituency includes part of the Wealden district.

Conservative leaders at Wealden District Council have intensified their campaign to persuade the Government to lower the number of homes the area is obliged to provide in future years is continuing.

Conservative-run Wealden and East Sussex are among thirty-one areas across the country chosen to receive new funding to level up their local bus services through the Government’s £1.2 billion bus transformation programme announced this week.

Conservative councillors were joined by Wealden's MP, Nusrat Ghani, on a fact-finding visit to Age We Care Horam Day Club.

The Boundary Commission for England (BCE) has announced the arrangements for the public hearings that will be held during the second consultation phase of the current review: this includes an online booking system which is now open.

Nusrat Ghani, MP for Wealden, led a parliamentary debate today (Tuesday 1 March) to raise the issues surrounding housing delivery in Wealden and urge the Minister to review the current targets for Wealden.

Wealden Conservatives were pleased to welcome the COP26 President, The Rt Hon Alok Sharma MP to the constituency to meet students at Hailsham Community College and to visit an emission-free van business based in Lower Dicker near Hailsham. 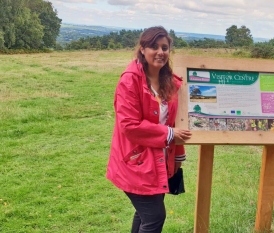